We are working hard to bring The ZORGOS Project to Oakland, and our Start Some Good fundraiser (http://startsomegood.com/zorgos) ends the day before Thanksgiving!

Help us meet our goal and share in our GRATITUDE with our supporters at this event!

IMAGINE an Oakland where respect, kindness, and caring are practiced in all homes!

THE ZORGOS PROJECT will bring positive change to Oakland through parent education, connection, and consciousness. In Esperanto, ZORGOS means “I will care.” The word also symbolizes the power to shift harmful bullying dynamics into caring and kindness, and positivity.

IMAGINE the potential change in our schools when attendance rises because students feel safe….

To accomplish this, THE ZORGOS PROJECT is donating 3000 copies of THE BULLYING ANTIDOTE to school, church, work, and community groups to empower parents with the research-based tools they need to cure the cultural mean-ness that hurts and holds back children, teens, and adults alike.

IMAGINE schools where our teachers are less stressed and experience greater success because kids have better emotional connections at home. Together, we can do it!

Through parent reading groups, we will create conversations where they need to happen, and expand the positive parenting community in Oakland, where non-violence is our greatest hope.

Get your copy of THE BULLYING ANTIDOTE at our party at Lake Chalet, Tuesday, November 24th, rain or shine!

All donors will be entered to win a FREE Gondola ride, courtesy Gondola Servizio!

Bring your friends, bring family, and bring your cell phone for our 11th hour rally! It’s Happy Hour (3-6) AND Taco Tuesday at the Lake Chalet, from 3 until closing!

And why not book a gondola ride? http://gondolaservizio.com/

Did you know Zorgos is Esperanto for “I will take care?” When people care, they will move mountains to achieve success. More importantly, Zorgos symbolizes the antidote to bullying… and the power to shift bullying dynamics into caring and kindness.

The Bullying Antidote provides parents with the research-based tools they need to cure the cultural disease that lies at the root of so many of our social ills.

The Zorgos Project will give 3000 copies of The Bullying Antidote to Oakland parents who will read it in school, church, family, or work-based reading groups.

We know you care, too!

Have you seen the movie?

The books are now living at Oakland Parents Together and other Oakland locations… until we fully roll out the program in January.

Do you still have The Bullying Antidote on your reading list? Don’t read this book alone! If you live in Oakland, START A READING GROUP in your school, church, work or neighborhood. If you live elsewhere, or if you are shy… or too busy… you can join our online reading group NOW. There are discussion questions being posted on the Zorgos Reader. Read a chapter and reflect in the comments!

CHECK OUT OUR GREAT PERKS! 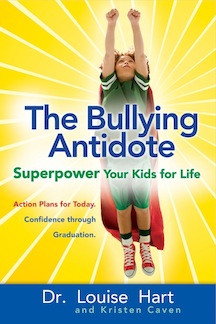 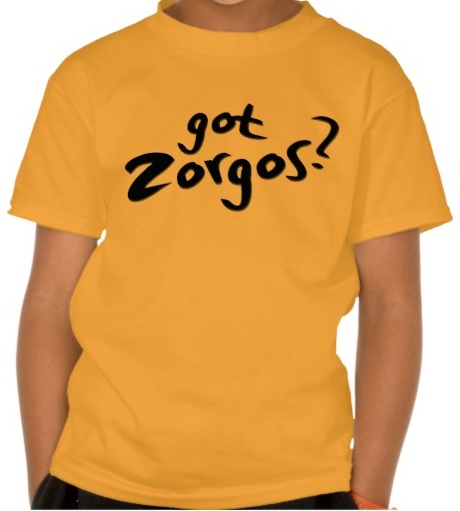 Stickers, books, t-shirts, a walk around the lake with the authors, a visit to your school…

Plus all donors who live in Oakland will be entered to win a Gondola ride on Lake Merritt!

Louise explains why she is standing next to 5,600 lbs of books. 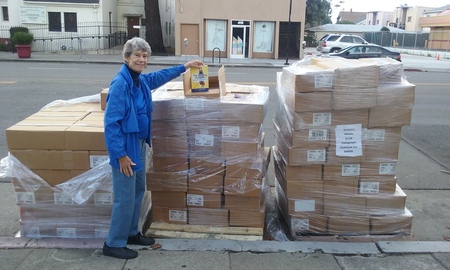 “As you know, my daughter and I wrote The Bullying Antidote: Superpower Your Kids for Life on request from the publisher. Kristen and I had great hopes that our book would help raise a more respectful, kinder generation by supporting parents! You can imagine our shock and disappointment when Hazelden notified us they would discontinue the book as of January 1, 2016. Apparently bullying is ‘no longer trending.’ But the problem is not solved, especially in our community.

“Kristen arranged for the remaining books to be donated to our Oakland community, in which she and her family have been deeply invested as teachers and parent organizers. (For the last two years, for example, she was president of the largest PTA in Oakland.)

“She discovered Oakland Parents Together, who hosts educational ‘Parent Cafes’ around the city. They were happy to receive the donation of the remaining books for our community.” 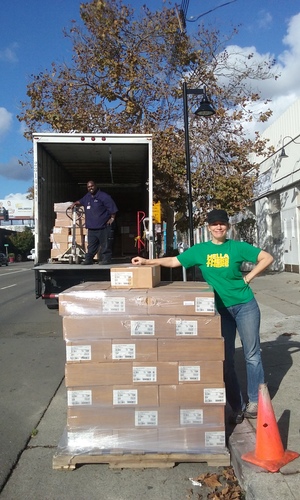 “We need some help to pay shipping expenses. And materials to spread the word. Bringing parents together who will read the book and work to create positive change will create some magic. One reader recently wrote, ‘The Bullying Antidote is a wonderful resource—comprehensive and well-written, clear and informative. These are the items I will reference when I use it to teach my classes:

“Please watch Kristen’s video and read about ‘The Zorgos Project.‘ She is really turning our lemons into lemonade, to help our children thrive! But she can’t do it alone.

“If you could make a donation TODAY, it would show the world that there are people who care about educating parents in a city where bullying, poverty and crime intertwine. And if this project works in Oakland, it could work elsewhere. Even a $1 donation will make a huge difference to kids, and make the world a better place!”

Here is something Kristen wrote for a poetry salon to share why this book and project are so important to her:

While writing Chapter 3: Problematic Childrearing Practices,
outside my open window
my nineteen-year-old neighbor
who lives with her unemployed mother
sat with her girlfriend
on the steps of the apartment next door.

Her toddler, ready for a nap,
complained, now and then,
in a nonverbal way, as babies do,
about the hot sun.

And every time she made a noise,
her young mother would say,

And instead of going outside
and telling her how it hurt me to hear that,
and how wrong she was
because babies need words
to understand what they are feeling
or they will grow up and tell everyone to shut up,
I had to keep working
to meet my deadline.

So I prayed that she would read my book someday.

While editing Chapter 5: Understanding Bullying,
a boy went to jail, tried as an adult
for doing one stupid thing
that hurt a person in a skirt,
and then telling the grownups
it’s because he didn’t like gays,
which wasn’t the truth.
But to be cool you must be vigilant
against anything different,
and under pressure,
this boy said
what he thought
they wanted to hear.

When I wrote Chapters 10, 12, and 17, (about Brains, Communication, and Technology),
my husband, a teacher, came home with stories.

Like of the boy sent home for bad behavior
whose sister put him in a headlock on the front steps
and the staff pulled him back to save him from her.

And the girl who complained
her teacher was mean
so mom came in to beat up the teacher.

And the boy whose mom
smacked him with a shoe
all the way to the classroom door
(setting him up for a wonderful day of learning…).

And what he tries to teach them all:

But the rules in their families clearly state otherwise.

When I was writing Chapter 6, Toward a Bully-Free Culture, in which I state:

“Human Rights are what we give to one another,”

I thought of a man
who was born victim class
in a country where inequality was the law,
but his parents knew better.
And when he became president
knees shook, hearts trembled,
because the ruling class knew
they deserved what was coming to them
for two hundred years of climbing on their power
with full helpings of neglect, abuse and death.

But this man said,

“Let’s move on instead.”

And that day
I found the word
for the superpower
that’s the antidote to bullying
that people can learn,
parents and kids alike.

Zorgos means “I will care.”

Moms and dads, let’s talk about the nuances.

Please spread the word about The Zorgos Project at Start Some Good.

If you can make a donation TODAY, you will make a difference to Oakland kids, helping parents creating safer and happier families, streets, and schools.

If this project works in Oakland, it can work elsewhere.

Even a $1 donation will be so appreciated!

A big thing happened during National Bullying Prevention Month: 3000 copies of The Bullying Antidote were donated to Oakland, California. The Zorgos Project will put them into the hands of parents who will read them together…because moms and dads can create a positive future! Please Like, Share, and Follow this campaign… and please donate if you are able!

The ZORGOS READER provides links to the studies, articles, books and blogs that inspired and informed The Bullying Antidote by Dr. Louise Hart and Kristen Caven; discussion questions for each chapter; upcoming author events; and blog posts with more news and resources.
Join 154 other subscribers